We recently spent some time with Chef Lauro Romero, Chef and Co-owner of República in NW Portland, Oregon. While breaking down a kampachi into filets with his STEELPORT 8” Carbon Steel Chef Knife, Chef Lauro discussed the story behind his kampachi tostada dish on the current chef tasting menu, as well as his inspiring approach to modern Mexican food.

In early 2021, Chef Lauro Romero, entrepreneur Angel Medina, and a small dedicated team opened República – a Mexican restaurant unlike anything else in the Pacific Northwest.

Serving an elegant five-course tasting menu in an airy space in Portland’s Pearl District, República receives shipments directly from Mexico with ingredients like ancestral maíz and chicatana ants to celebrate Mexican cooking in all its complexity.

Chef Lauro and his team’s hard work, sacrifice and dedication to their heritage and the craft of cooking is paying off in spades. They were named “Restaurant of the Year 2021” by Portland Monthly Magazine, and earned a spot in Bon Appétit‘s “Top 10 Best New Restaurants” in the country in 2022. The team has opened two new ventures in recent months –weekend brunch spot La Fondita and late night taco and cocktail bar Los Ponchos – with more projects in the works.

“Every night at 5 p.m., we get to go out there and share our history, our culture and every beautiful dish prepared by our team,”

At the age of 11, Chef Lauro Romero’s mother moved his family to the countryside of Hidalgo, Mexico. There, he developed his love for food. For him, the food of Hidalgo was about culture and community–a true farm-to-table experience. He moved to the United States years later and worked his way up through the culinary world. He didn’t go to culinary school, but he says he had his books and his ideas. After working at high-end restaurants and kitchens, he wanted to create his own menu using ingredients from the old and new world.

Passionate about researching the history of ingredients and Mexican food, he serves his artistry up on a plate through his ever-evolving tasting menu at República.

“It’s a nightly symphony, and Chef Lauro Romero is the conductor,”

A Story to Savor

On República’s Instagram account, there are many inspiring quotes. In their own words, the dishes at República change often, but their passion and technique does not. “We never set out to be the best Mexican restaurant in Portland. The goal was always to be the best storytellers in the world.”

After our conversation with Chef Lauro Romero, we believe they’re succeeding.

Below, Chef Lauro discusses knives, his cooking philosophy, and the key ingredients that make his celebrated kampachi tostada dish.

“A love letter to this culture that has given us so much,”

We know you’re a bit of a collector of premium knives, and you’ve had your STEELPORT 8” Chef Knife for a while now – what do you think of it?

I have a lot of knives. Outside of cookbooks, knives are really the thing I get excited about. I spend more money on knives than I should. Usually on a daily basis, it’s my chef knife I use most because I don’t want to have to carry a lot of knives.

The STEELPORT 8” Chef Knife is not as brittle as Japanese-style knives. It’s good for fine work like shallots and chives or breaking down fish, but you can also chop carrots with it. I like it. I like it a lot. On top of that, it’s a beautiful knife.

With most knives you’d have to constantly be sharpening and maintaining. With traditional steel knives, they’re kind of brittle. When it comes down to heavy work like carrots and things like that, they destroy your knives which get very expensive. This one [the STEELPORT Chef Knife] just throws down. It’s pretty dope. Honestly, I was surprised. I was like, oh, okay, let’s go.

Do you have any tips for anyone trying to break down fish at home?

Breaking down fish comes with a lot of messing it up and practice, basically. You need to understand the anatomy of fish and get an education on how to properly break down fish. Obviously the knife plays a big part of it, too. If you have a dull knife or not the right knife, it’s most likely you’ll have a very hard time breaking down fish. And fish is very delicate, so it’s very important to have a sharp knife…probably the most important part of it.”

Can you talk a little bit about the ingredients for your famous kampachi tostada dish?

The fish is cured with coffee and chicatana ants, and we make an aioli with the ants. The ants have an earthy taste, kinda sweet, with a little bit of funk to it in a really good way. Then we put the chicatana into smoke, and when the dish gets to the table and you open it, you inhale the smell of the ants.

This ant only comes out during a very small period of time in Mexico. After the first heaviest rain of the spring, it rains so hard it floods everything, and they have to come out of their nests. The chicatana ant flies, so people catch them, light a fire wherever they are and toast them. Their wings burned and toasted. It creates a sort of heavy taste.

So, we put the ants into the smoking gun and put them in the fire to get that experience.

[At this point, Chef Lauro paused before heading downstairs to get the cure/marinade for the fish, and started to talk in-depth about this dish and his philosophy of cooking.]

So, I started really going down the rabbit hole of where corn came from, and you get into this whole ecosystem of what plants are native or from different regions. I thought, let’s focus on corn and figure out what’s native and what isn’t–what was stolen and what was brought to Mexico. That’s what this restaurant concept is going to be.

When I created this dish, I wanted something that spoke to that idea. My partner was knowledgeable about coffee, and he wanted to start a company that involved coffee. Coffee is not native to Mexico by any means, so I wanted to create a dish that would sort of tell that story. So, we have both coffee and ants to cure this fish. Which is kind of like a different presentation of our plan. Then the dish was kind of an homage to all of that – the corn, the ants and coffee.

Another example is that kohlrabi [an ingredient in another República dish] is not Mexican, and chiles were not native to Japan, but now chiles are definitely influential in Japanese cooking.

My mind is like…okay, this is something that was native to this place, was taken somewhere else, it evolved, and now I can take that and incorporate it into this dish. There’s that whole influx of what that food represents in this restaurant, and the story we’re trying to tell.

We ask ourselves all the time about Mexican cooking. There are so many points of reference that go into it, but the reality is that Mexican food is very global. You get a lot of influence from other parts of the world. Like ‘al pastor’ is not a Mexican thing. I think it was brought by immigrants and then was adapted to the local ingredients, and a new dish was created. 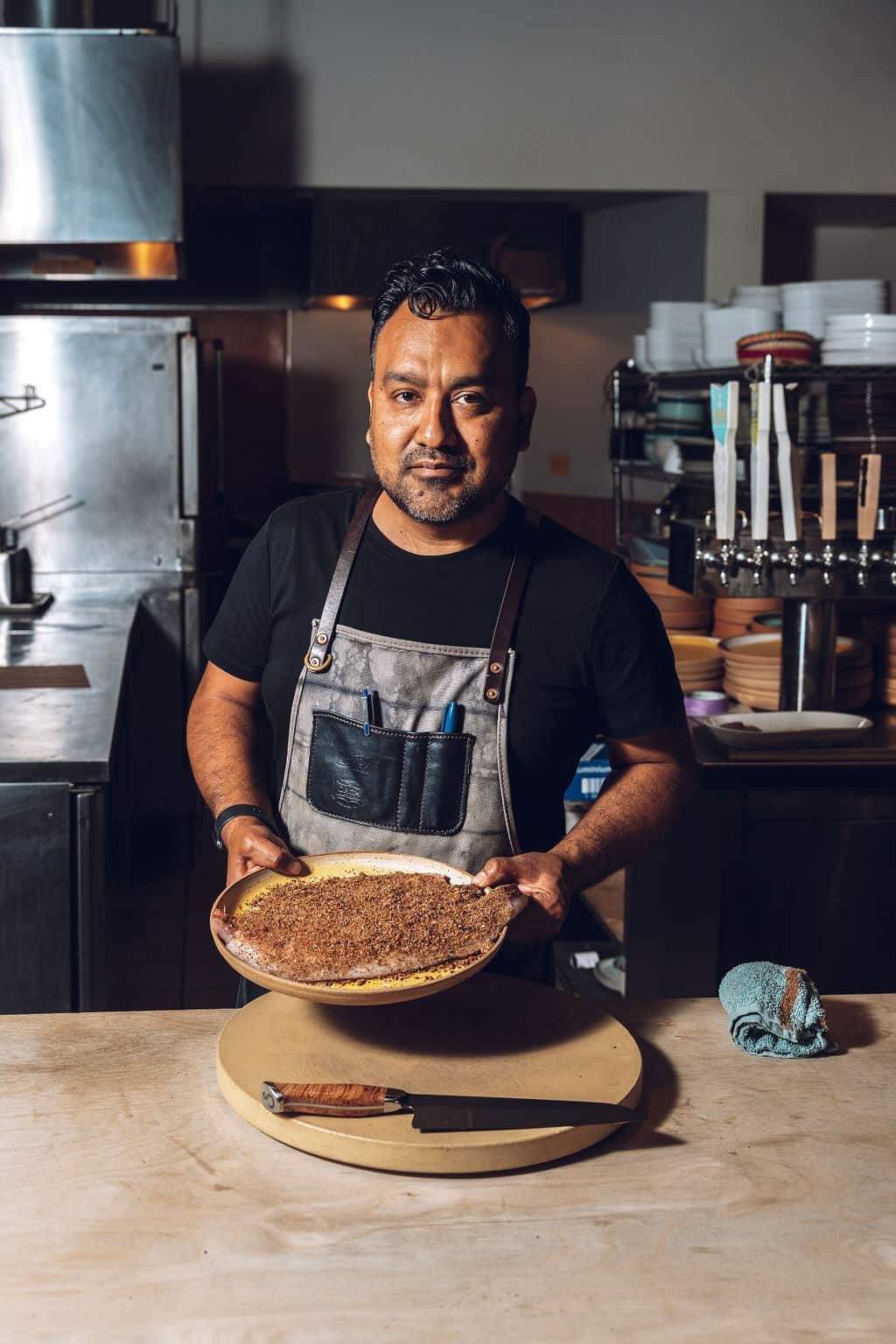 If you look at ancestral cooking versus modern cooking, it’s a very different style of cooking. The diet of the ancestral people was mainly birds, insects and vegetables. Then, with the arrival of the Europeans and Spaniards, all these things were introduced and al pastor evolved into what it is now. When you look at the Bajas, it’s a food that’s very different than Central Mexico or Southern Mexico, and it’s influenced by a lot of Asian migration and even Peru. But the Mexican version is very different than what they do in Peru….I kinda nerd out on these things.